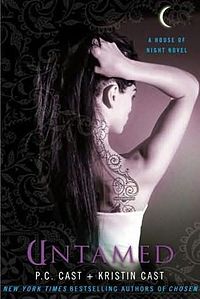 There is a new presence at the Tulsa House of Night. And I’m not just talking about the new guy at school (yes, there’s yet another one) and the fact that Zoey’s ex, Erik is, (un)fortunately, back too. As if Zoey didn’t have enough to worry about already, what with having next to no family, an undead (red vampire) best friend, other best friends who’re not talking to her, and so on and so forth.

But with the new presence(s) looming on the horizon the authors probably decided to knock some things off Zoey’s list and her friends make up with her soon after. The other positive being, the war on humans due to the vampyre slayings has been put off.

However, it’s not all good. It’s obvious Neferet has an evil plan brewing and there is still the army of undead vampyres walking around that has got to be up to no good. And now there are these strange things that attack people in the dark.

This book marks the turn towards where the series has been heading all along and things are about to get a lot darker and complicated from here. And you can always count on the addition of trouble in the form of males of some species or the other.

2 thoughts on “House of Night 4: Untamed”