It has occurred to me recently that now that I’m no longer a middle-grade reader, young adult or even (alas!) a new adult I have been reading far more of the books meant for all these mysterious age groups. When I was a young library-hunter (it was almost always the first thing I would look for in a new town), the classics section was where I’d usually be found growing and sometimes I feel like my childhood was entirely crowded by kids or people who lived (even in the imagination of writers) a few centuries before I did.

I recall discovering magical tales from around the world and the most beautifully illustrated books for kids (I wasn’t reading Dickens at 5). Libraries, let me tell you, were no less than other-worldly portals and every time I’d find a new one, I’d wait breathlessly to find out what it would reveal to me. And while I do enjoy being able to travel without lugging around a suspiciously bulging bag (thanks to the ubiquitous kindle) it is a trifle jading to be at the mercy of a system where you only have access to either the familiar or what the businesses think you ought to become familiar with. But I guess that’s natural evolution for the species of readers … and readees?

So, ironically, these days, all the fodder for my brain seems to come from love triangles (sometimes quadrangles) and the firm conviction that the future of mankind depends on whether or not that cute guy will give you a second look. And yes, this is too harsh an indictment and I do know that not all of the above mentioned genres are about the same things but … a remarkable number of them do seem to be. And I do read the other kind too. I promise.

My most recent discovery (thanks again, kindle) is the author Ruth Saberton and recently, as it frequently happens to me nowadays, I’ve read quite a few of her books in a row. And perhaps, that is partly to blame for my opinion of this most recent one, namely, The Wedding Countdown, the story of a young Brit-Pakistani woman who sets out to find herself the perfect Pakistani husband before her parents saddle her off to a distant cousin from far-off Pakistan.

So, to start off, let me just be honest and tell you that the main draw of the book for me was that the protagonist was of South Asian origin. And that the book promised to put a fresh spin on the whole rom-com, chick-lit hullaballoo by taking a more ethnic approach to the whole deal. If you get what I mean? Like a ‘what are the dating challenges of a young British South-Asian whose life seems doomed be singularly unromantic’ kind of thing, I guess.  I believe the book has also been written in collaboration with someone who would, it is assumed, actually know what are the dating/ romance challenges often 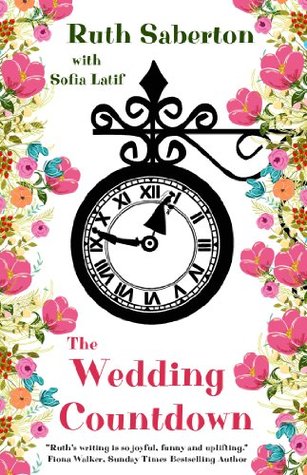 So, to be fair, I cannot judge on authenticity of those claims. Maybe that is how things function for young British South Asians? It must be confusing, of course, to get caught in the crossflow of two entirely divergent cultures. And yet, within the first few pages itself I found myself thinking “Seriously?? Does this really happen?? With educated people in this day and age??”  (I’m now coming to believe that the farther away people get from home, the more they tend to gravitate towards their ‘culture’ or some semblance of it.)

And yet, as a reader, I found the depiction of the whole cultural angle in the book to be way too cumbersome. It was, I know, supposed to be pivotal in the flow of the story and yet, it sounded almost forced. As did the random littering of Urdu/Hindi words throughout the story-scape! It was almost exhausting!

I mean, I’m an Indian. And while it’s not my mother-tongue English has, certainly, always been my first language because it’s the one I think in. And one of the coolest things, I’ve always thought, about English-speakers in South Asia is how we’ve made the language our own and how  seamlessly we flow from expressing ourselves in one to the other. (By which, I do not mean the systematic butchering of grammar that’s often done in the name of South-Asian English) And yet, the author’s efforts in this book to make the language seem more organic, perhaps, felt patently false to me. It’s never been one of my favourite words but now, I swear, if I have to hear the word izzat (meaning: pride/honour, and has somehow come to be associated almost entirely with feminine propriety) one more time I will not be responsible for my actions!

It did have its up-sides, of course (read, a cute hero) but right from the beginning, I found myself predicting exactly what was going to happen next. And that, added to everything else (including a heroine who seemed almost studiously blind), made the book a less than stellar read. Overall, this was not one of my favourites; a 3/5