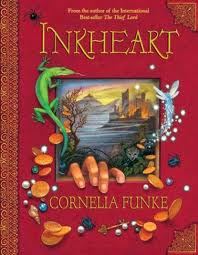 It isn’t really a new idea. Any storyteller would toy with the idea of writing one about storybook characters come to life. But like I once read somewhere, there are no new ideas. Only old ideas told in a new way. And to give Inkheart credit, it doesn’t take much away from you wanting to read the book.

Mo and Meggie – a book doctor and his daughter and his terrible secret. It takes a stranger turning up in the middle of the night and for their life to begin resembling a shipwreck for Meggie to discover the truth about her daughter. Mortimer, also apparently known to some as Silvertongue, was one of the few who could read storybook characters alive. And during one unforgettable night he’d read into existence two of the most dangerous fictitious villains and one fire-eater into our world. And also lost his wife into the story. Literally.  And now they want him back. And Dustfinger the fire-eater has come to warn him. Or has he?

Ruthless Capricorn wants only one thing. More. While Dustfinger wants nothing more than to be able to go back home, back to the world that lay within the pages of the book, the only place he belonged. And it had been a long nine years of exile.  And Mo wants to save the only remaining copy of  Inkspell in the hope that someday he’ll be able to bring his wife back. And there begins the adventure, one Meggie would have never thought would be a part of her life as she journeys around Italy for a book and for freedom.

But will any of them get what they want? Read the book to find out.