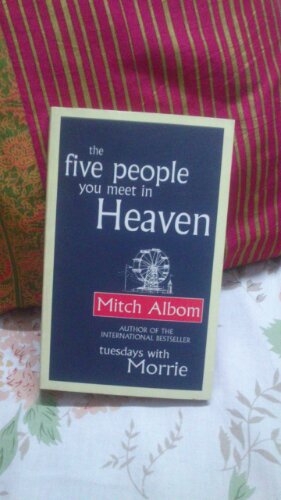 Now this was one book I’d been wanting to read for a while. It was one of those for me that frequently came up in conversations wit ppl going, ‘have you read that one yet?’ So finally I got home a copy and settled into it.

What I found interesting was the unassuming author’s note and Albom contending that this was how he rather hoped Heaven would be. And so was born the story of Eddie’s afterlife.

Eddie dies at 88; a war veteran from a generation of war veterans, stuck in a post war world. Eddie was born and died at Ruby’s Pier, in his estimation never having been anywhere, done anything or been anybody. It’s a desolate way to feel at the end of your days.

And yet, what becomes abundantly clear, with the unfolding of his life through the eyes of the 5 people he meets in heaven, plenty had happened to Eddie.

Or perhaps, that was just how I felt. Somehow, in my head living through a war and being instrumental in life and death didn’t count as ‘nothing’. Nonetheless, I’m not sure the author had intended to make that point. So there were perhaps lots of levels at which the book didn’t connect with me. Not least, im my unwillingness to accept the possibility of finding your life meaningless at the end of the journey. That would be truly horrible! Or maybe it’s just the idiocy of youth. Haha. And yet, I found the quaint morals delivered to Eddie through his 5-person heaven beautifully simple and rather profound.

What was even more interesting was the five people Eddie encounters in heaven aren’t necessarily the first five that would occur to you! I mean, when I sat down to think of who my five would be I ended up picking the usual suspects. But then that wasn’t the pattern of Eddie’s heaven. And honestly, I’m still not convinced my idea of heaven would be a recap of my earthly life. Which leaves me with a nice blank page to fill with it. 🙂

In the meantime I give Eddie’s five people a full 5!

6 thoughts on “The five people you meet in heaven”