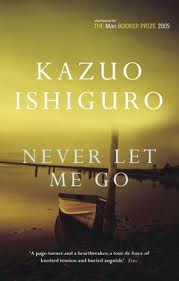 I picked this one up on the recommendation of a friend. And it was the look on her face more than what she said that made me feel like I was compelled to read it. And yet, in spite of all that compulsion it took me a while to, first, get to and then, get into Kazuo Ishiguro’s Never Let Me Go. And I must warn any of you who pick up this book, the story is as poignantly heartbreaking as the title. And far creepier than it lets on. But by the time you close those covers there are sure to be at least a few scenes that’ll linger with you long afterwards. I know which those were for me.

Strictly speaking, the book should qualify as a sci-fi novel. Though in actuality it’s probably more like the other side of sci-fi; the human side of it, ironically enough.

Narrated by 31 yr-old Kathy H. you’re told immediately that her post-World War II world is divided into people known as carers and donors. And that she’s looking for a magical place named Hailsham that, nevertheless, always seems to elude her.

And then we’re taken back to that slice of apparent utopia, Hailsham. A place where a group of youngsters seem to almost come into this world and spend their entire youth preparing for their destinies. Only, that world isn’t quite this world. Or, at least, I hope so.

The first half of the book stretches out over the grounds of Hailsham, generously interspersed with anecdotes and tales of a unique school life and oblique mentions of “years later when I became Ruth’s (or Tommy’s) carer we talked about that day”. And through all this merry tripping over memories and juvenile hopes, concerns and dreams, never once does Ishiguro think it necessary to spell it out for his readers; to give form to the vague sense of foreboding that follows us through the book.  “I don’t know how it was where you were, but at Hailsham” things were definitely different.

And while he never quite spells out what exactly these students being brought up in Hailsham are, the book is imbued with a certain sense of intransigence, and of the fragility and poignancy of life. Especially when you’re living it on a thread that will run out far sooner than you could expect.

The book also touches upon something else I remember was in debate a few years back and that fascinated us some in law school … does your right to life mean as much if you are but a creation of science? What is life and who deserves how much of it?

Does love mean more – does life – When you know it could but be only so long? Would you relate to people differently; want to give more or would you even more jealously guard that which you do have? But I’m sure all of us would still want some one who would never let us go…

2 thoughts on “Never Let Me Go”