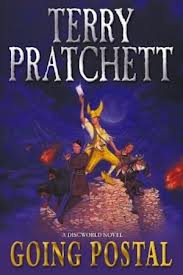 Hushhhhh… they’re talking? Can you hear them?

There are things Moist Van Lipwig has never been before. Moist Van Lipwig, for instance. And a postmaster for, well, another instance. He’s been many other people but he’s never tried the Mr Lipwig  hat on for size. And now, I’m afraid, it was far too late for him.  For, you see, Moist Van Lipwig was to be hanged on the morrow. Of course, he’d never planned on actually dying, as he said, but there it was. Imminent hanging was staring him in the face. And it was not the only thing in his face at the moment. Because in an interesting interpretation of amnesty and putting the criminal classes to work, Lord Vetinari, the kindly patrician had stuck him between a rock and a hard place. And it’s hard to say which of the two was Lord Vetinari himself.

The upshot was that Moist Van Lipwig was now to bring his own brand of …er … criminality to being the postmaster of an institution as dead in the Discworld as it is in ours. While our world revolves around our smartphones, the people of the Discworld had given in to the supremacy of the Clacks. They were faster and better, after all. Whoever even used the post anymore? However, too much of a good thing usually has a story behind it and there were evil rumours about the Clacks, if only people actually knew of them. And this is where our dubious though (to be fair) reluctant hero steps in to … save the day?

Though, of course, he has to prove his worth first. ‘Cause, of course, every one knows letters have life and the custodian of them has to be a worthy man, right?

There are many things I loved about Terry Pratchett’s Going Postal, the brilliant, shiny humour that beautifully balances the ever-present dark side in Pratchett’s works, not the least of them. In fact, I think the humour is more evident in this one than in his other books I’ve recently read, just as is the satire. It is not often than Pratchett kills like this in his books while this one begins with one death and the threat of another. Even the telling of the story of the golems resounds with sorrowful instances from human history. The characters are lovingly created and even Moist Van Lipwig is easy to love with the wry sense of humour surrounding him and also because he is just exactly as the hero in this book should be!

A thoroughly enjoyable read. One of the best Pratchetts I’ve read, this one gets a 5/5!