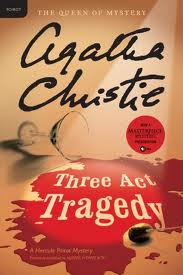 Sigh…this, undoubtedly is the downside to having read nearly every Agatha Christie ever written. You go to a bookstore and rummage through shelves while sales attendants eye you askance till (yay!) you finally find a book you haven’t read before. Or so you think. Because you’ve barely reached the bottom of the first page before you’re thinking “Damn it! I’ve read this one! It was the ______”

Aha! You didn’t think I was going to tell, did you? (hehe)

When celebrated actor Sir Charles Cartwright expresses a desire to retire from the stage and move away from society to live on a remote island nobody who knows him think it’s going to last. And one house party at the “Crow’s Nest” as he calls his retreat is enough for his friends to know why. The veteran actor, with the hearts of many a woman under his belt, had fallen in love. With a girl 30 years his junior, no less! However, that’s not all that happens at that house party as the first night itself results in the death of a man. And that’s the first act of this Three Act Tragedy (Poirot)

There aren’t too many whodunits that you can re-read; especially when you have a vague albeit almost certain recollection of who done it! Three Act Tragedy, despite being a Poirot mystery is different from the many others written by Christie. Even though the book begins with yet another dinner Poirot is invited for, his actual involvement in the book doesn’t come in until close to the end. Until then Christie seems content to let the characters play pin the donkey with catching the murderer. And of course, like many other Christies, there’s a love story at the heart of the mystery. And finally, the brave doth indeed win the fair. 🙂 However, as one after another ends up in a grave it falls to Poirot to find the perpetrator.