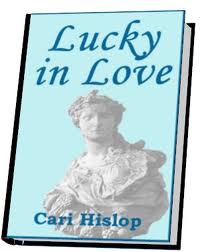 It so happens that one way or another I am a huge fan of Regency romances. But I also realise that picking up one of these books to read is a tricky proposition at best. While we’re not all historians and hence, no experts you don’t want to come across bits in the story that seem suspiciously modern day and make you wonder “are you telling me they talked like that in 18-something? Seriously?”

So when I read the little blurb on Lucky in Love even though it was an author I’d never read before, I thought to myself ‘hmm…this sounds interesting’. However, once I started reading the book I couldn’t figure out if it was for real or meant to be a parody of historical romances. Until, thankfully, the heroine made an entry. I am sorry to say though that the change was but marginal.

Of course, our well-coiffed (finally) hero (his friends call hum Lucky, by the way) meets the (not-so-lucky) heroine and, despite intending not to, falls in love with her. However, if you thought that meant the world was going to be all sunshine and laughter you’re wrong. Our hero (a Lord, of course) who, after making a lacklustre entrance, had finally begun to show some signs of promise turns into a dithering fool as his brain is gripped by a fever (and I mean the kinds that make you sick and snotty, not how they usually mean it in a romance) and seems intent on acting like an idiot. I mean, OK, I get it. We all hallucinate when we are unjustly struck by fever and if left to our own devices would probably do some very stupid things. But not to the extent that dithering idiocy seems like a character trait. Or so I hope. And do I really want to read about it too? I’m not quite sure. There are times in the book when you wonder if it wouldn’t, in fact, have been better if the heroine had just ended up with the anti-hero.

The heroine who thankfully retains her modicum of intelligence along with the anti-hero and other miscellaneous characters attempt to save the book. However, on the whole the characters are not really believable and the protagonists seem to be trying too hard to seem like they belong in a … well, better book.

To be fair, the book does have some laugh out loud moments and is a fairly quick read. However, I would not really recommend you picking it up unless it’s out of her sheer and compulsive curiosity.

I’d give the book somewhere around a 2 on 5 I think.